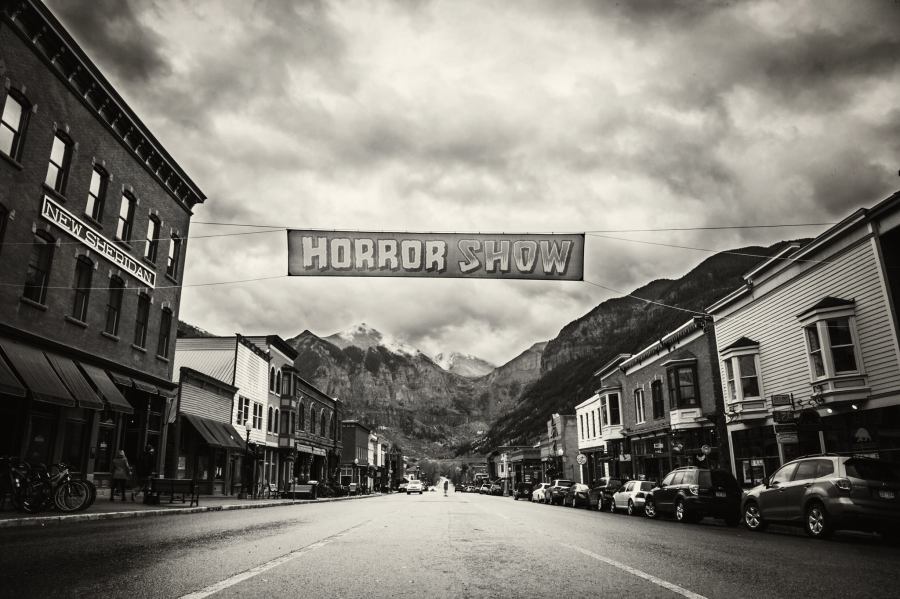 The second wave of films has been announced for Telluride Horror Show 2018, which will take place the weekend of October 12th-14th in Telluride, Colorado.
New additions to the lineup feature haunting ghost stories, medieval revenge plots, an exclusive sneak preview of an upcoming horror-comedy anthology, and even an immersive virtual reality experience!
With the first wave boasting fest favorites like zombie-musical Anna and the Apocalypse, Norwegian black-metal horror-thriller Lords of Chaos, a solid collection of short films, and a 30th anniversary screening of Killer Klowns from Outer Space with Director Stephen Chiodo in attendance, this year is proving to be a jam-packed wild time.
For a look at the newly announced films and their descriptions, read on! The complete lineup, schedule, list of events, and special guest information are also available here.
Coverage and film reviews will be posted on Strange Moon Collective soon.

DeadTectives
USA | 2018 | 92 min | Director: Tony West
U.S. PREMIERE
A team of reality ghost hunters encounter trouble when they try to save their show and experience paranormal activity for the first time. What happens when fake ghost hunters meet REAL ghosts?

Heretiks
UK | 2018 | 81 min | Director: Paul Hyett
U.S. PREMIERE
In the early 17th century, innocent young Persephone is falsely accused and put on trial for her life. Her fate seems sealed except for the timely intervention of the mysterious Reverend Mother offering her not just sanctuary, but hope. For the Reverend Mother is the self-appointed leader of a small religious retreat, a secluded Priory, where her fellow Sisters devote their lives to the Lord and seek atonement for their pasts. But upon arrival, Persephone is plagued with terrifying visions and soon realizes that it’s not salvation that awaits but a battle for her very soul itself. Paul Hyett’s previous films The Seasoning House and Howl were official selections at the Telluride Horror Show.

The Boat
Malta/UK | 2018 | 86 min | Director: Winston Azzopardi
COLORADO PREMIERE
A lone fisherman on his daily run finds himself lost in a thick fog which proves impossible to navigate. The worst is yet to come when his encounter with a seemingly abandoned sailboat becomes a fight for survival against an enemy unknown.

Terrified
Argentina | 2017 | 87 min | Director: Demián Rugna
No one can explain what is going on in an ordinary suburban neighborhood in Buenos Aires. Voices are being heard from kitchen sinks. Bodies are levitating. Evil is here. It is up to a doctor, her colleague, and an ex-cop to get to the bottom of this neighborhood nightmare.

Tigers Are Not Afraid
Mexico | 2017 | 83 min | Director: Issa López
COLORADO PREMIERE
In a Mexican city turned into a ghost town by the drug war, Estrella’s mother vanishes. Estrella makes a wish to bring her back. And her mother does return – from the dead. Terrified, Estrella escapes and joins a rag-tag gang of other children orphaned by the violence, all escaping their own past. But she learns that in a city ruled by death, you can’t simply leave the ghosts behind; they walk with you wherever you go.

Here There Be Monsters
Australia | 2018 | 14 min | Director: Drew Macdonald
COLORADO PREMIERE
To escape incessant bullying on the bus ride home, a young girl falls asleep only to wake up trapped at an empty bus yard, with something lurking outside – something big – and if she wants to make it out alive, this frightened girl will have to unleash a monster of her own.

Infinity Tree
USA | 2018 | 2 min | Directors: Brandon LaGanke & John Carlucci
After he and his mother move into a new house, Jack finds a mysterious tree in the backyard that changes his life forever.

MAD GOD (Part 3)
USA | 2018 | 11 min | Director: Phil Tippett
COLORADO PREMIERE
You never know what you will find when you plunge into the world of MAD GOD, a hybrid stop motion, live-action, experimental meditation from the mind of Phil Tippett.

Occupant
USA | 2018 | 5 min | Director: Peter Cilella
COLORADO PREMIERE
A quiet night at home takes a bizarre turn when a man goes to investigate a strange noise in his back yard.

Oscar’s Bell
UK | 2018 | 12 min | Director: Chris Cronin
WORLD PREMIERE
Duncan (Paul Bullion, Peaky Blinders) and his dog Oscar have gone on their weekly camping trip into the wilderness together. However, when Duncan looks out into the woods, something else looks back.

Sybil
UK | 2018 | 13 min | Director: Joanne Mitchell
U.S. PREMIERE
The mortician’s life can be a lonely one, but there are opportunities for love. And revenge. In this macabre tale, nothing will stop this mortician from achieving her heart’s desire.

Wyrmwood: Chronicles of the Dead
Australia | 2017 | 7 min | Director: Kiah Roache-Turner
COLORADO PREMIERE
A girl, trapped in an underground bunker with a psychotically evil doctor and a group of zombie-blending soldiers, must orchestrate a fantastically daring escape before her brains are sucked out of her skull.

The Telluride Horror Show, Colorado’s first and longest-running horror film festival, returns for its 9th edition October 12-14, 2018. Every year, the festival attracts the latest & best horror films from all over the world and attendees from all over the country for an intimate gathering of genre film fans in the world-famous mountain resort town of Telluride, Colorado. For three days and nights, experience an eclectic mix of horror, suspense, thriller, fantasy, sci-fi and dark comedy in Telluride’s historic Sheridan Opera House, Nugget Theatre, and Palm Theatre, with many of the films showing for the first time in the US. If you love horror, and film, then you can’t miss this fest. Named one of the “20 Coolest Film Festivals” by Moviemaker Magazine.