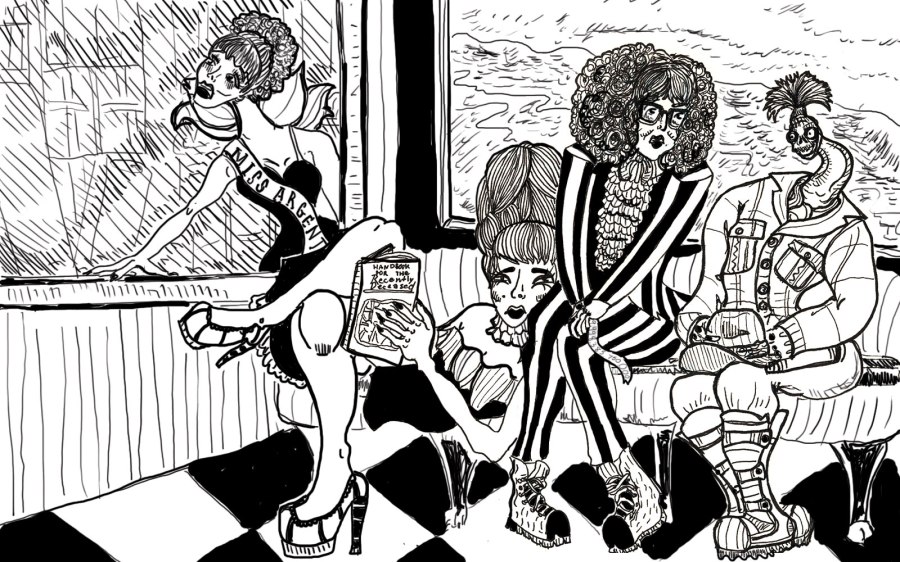 When considering what horror films make up my top list, it’s difficult to sift through every factor because of how versatile and vast the genre truly is. There’s classic black and white monster horror, 1970’s experimental Italian masterpieces, slashers, horror comedies, sci-fi horror, b-movies, whimsical, exploitation, gore, grit, grime, and everything in between. So where do I even begin?

I like to think back to my impressionable young self, sitting wide-eyed and overwhelmed by the creativity, wit, and bizarre elements that fused together in the tube television before me as I watched Beetlejuice on repeat. A character as wild, crass, loud, and colorful as Beetlejuice himself had in my mind at that point been exclusively anchored to cartoons, but there he was in the flesh (substantially molded and decayed after all of those years conducting bio-exorcisms). Michael Keaton was somehow able to perfectly craft a disgusting and deplorable hero as well as a charmingly smooth villain in one larger-than-life performance.

Of course Beetlejuice in Beetlejuice is the wacky presence you can’t shake from your mind, but when you really look at the film as a whole, the creep is absent for most of the drama. Barbara and Adam Maitland are the heart of this cinematic Frankenstein. In a few short minutes, we fall in love with a couple looking forward to their stay-cation together. To make them even more human and relatable, the audience is given a hint that the Maitland’s can’t have children, an intimate fact that is exploited by friendly-neighborhood realtor, Jane. Oddly enough, I could write a full vicious tear-down of Jane’s inappropriate and selfish behavior, but this film isn’t about Jane so I will restrain myself.

Our lovely couple dies and are confined to their cozy home, unless they want to take a step out the door and fall into a world of yellow dust and deadly sandworms. Oh how I wish we can see more of Saturn, a desolate feeding ground for Burton’s creative mind to run wild. But then again, his quirky aesthetic makes its way into the Maitland home with the introduction of the Deetzes.

The Deetz family perfectly embodies the late-80’s transplants fleeing from stark New York high rises to find “peace and quiet” in smaller towns. A father desperate for a change of scenery that can’t help but feel the itch for enterprise. A stepmother obsessed with expressing her inner vision out onto every surface she can see. A daughter dripping in black with an eye for peculiar happenings.

Lydia Deetz was hands down the most influential character of my young life. Her vintage-meets-goth style danced in my mind as I entered my formative years. My fascination with death and all things other-worldly could be traced back to Lydia’s interactions with the recently deceased Maitlands and the ghost with the most himself.

Stepping away from Lydia’s in-between reality and diving straight into ‘the other side,’ Beetlejuice presents the idea of the afterlife as a tragically hilarious BMV. Forever run by suicide victims and haunted by lost souls, the waiting room and twisted halls that make up the corporate side of what lies beyond death is an inspired and addicting atmosphere.

The lighting in this film alone satisfies my hunger for rooms cast in hot pinks and jeweled greens. Beetlejuice’s putrid coloring pairs perfectly with his black and white striped suit and his old-fashioned burgundy wedding attire, which I can only assume is covered in mothballs. Only in this fantastically morbid world could a story of a couple drowning end with an extravagant, forced wedding ordained by some ghoul-alien hybrid where, at the last second, the ceremony is halted by Barbara Maitland in her own wedding dress riding in through the ceiling rodeo-style on the back of a sandworm that devours Beetlejuice on their way back to some netherworld.

Saying this alone is both bizarre and wonderful. But how would I describe this movie to someone who has never seen this or any other Burton-esque tales? The plot is absurd! Strange and unusual even. But similar to the fictional icon of my life, “I myself am strange and unusual.” If I ever get the chance to become possessed by the words of “Day-o” during a formal dinner party or sing along with “Jump in the Line” while levitating, my Beetlejuice dreams will come true and everything I hope to uncover about this weird world will make a little more sense.

About the Illustrator:
Emily Rochester is a Chicago-based illustrator and designer. She is a lover and creator of all things toothy, fuzzy, monstrous and in between.

More about Emily and her work: emroar.com